Chocolate comes from the Cocoa Tree which is original from Mexico. Legend has it that Quetzalcoatl gave it as a present to mankind and so its name means God’s Food in greek. It had enormous political, social and religious meaning all across Central America and it first came to Europe in the hands of the Spanish conquerors.

Initially it was consumed mixed with cane sugar and a pinch of cinnamon, and it was a beverage. It remained a liquid pleasure until 1928 when cocoa butter started to be extracted and at the end of the XIX century the first pralines were born.

There is something warm and cosy in a cup of hot cocoa in a rainy day, this might be because it is sweet and delicious but also because cocoa has a good dose of fibre and micronutrients that produce a feeling of wellbeing. 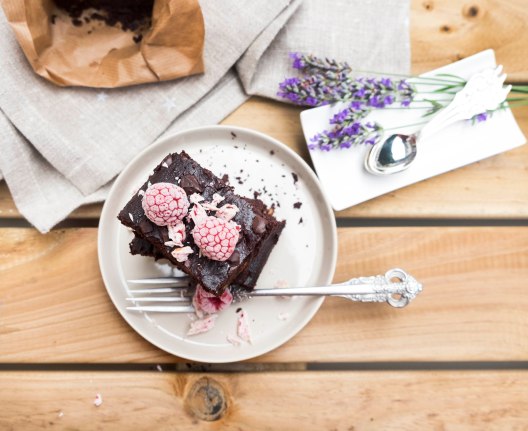 Brownies came later. Most people that enjoy a healthy dose of chocolate know that the darker the better and that it’s not the healthiest thing you can eat, so for all of us that love a bit of that nutty, utterly chocolaty flavour, here you have a healthy version.

I hope you like it. Best served with a cup of tea.

In a pot, melt the oil, and the chocolate and add the cocoa powder. Then add the sugar, salt and the coffee. Let cool down for 5 minutes and then add the eggs and the rest of the ingredients and bake at 180C for 25 minutes.